i use a collection of hardware i've built, scrounged, borrowed or (reluctantly) bought over the past 10ish years. the place with the most New Stuff is audio gear, as I put together some audio improvements now that I live work and die at home. I'm separating the hardware topic out into a few categories:

i love unifi°  stuff. I've got two 8 port switches (one PoE, one powered regularly, got about 3 years apart), a 3port usg, and a PoE unifi ap ac lite. its really nice to have everything talk to a central place, and makes troubleshooting network issues a lot easier. Unifi does have some problems with reliability on new updates, so I typically update once a month, giving any new updates time to settle before I apply them. I haven't had an outtage since the first month i got the USG ✨

the rack that the unifi stuff lives in is a 19" home network rack that is (apparently) very popular in europe and aboslutely impossible to find parts for in the US. I have paid someone in germany a decent amount of money to 3D print fittings so tha I can have a better rack setup. I haven't tested the new parts yet so ymmv, but here is the website I used.

i have a built from scratch very old "server" that used to be my main computer. It was the first computer I built when I moved out into my own apartment. Its got a i5-2500K, which google tells me is from 2011, so I got this about a decade ago. It has 16 gigs of ram and some very shitty graphics card. it hosts my media server shit, which includes the *arr apps, plex, sabnzbd, etc.

I have a raspberry pi that serves as my VPN endpoint for a site2site wireguard configuration. the pi acts as an always-on router that can talk to my home network.

I have an extremely old synology 4 port nas. friend gave it to me several years ago, after he had owned it for a bunch of years already. it still gets updates. its slow, and soon i'll have to upgrade to still get updates, but for now its still does me good.

i have a collection of vms in digital ocean, the precise number of which fluctuates based on any ongoing projects. right now, I have 3: a pleroma server, a matrix server ° , and a General Purpose server that hosts several things, including gitea, my znc server, and some bots that are either pointless, broken, or shitty (but are fun, and i made them!).

i have too many of these lol. i have a windows tower that is just for playing games. its got a Ryzen 3*** series CPU and 16 gb of ram. I've got a system76 oryx that i have used as my primary user device since 2016. Its a lovely device with a few caveats; system76 sells rebranded clevo machines, and there are more than a few QC issues with these guys. the laptop keyboard doesn't work reliably at all, though in my case that's fine because I never use it as a laptop, its always attached to my full desk setup.

for mobile devices i have an iPhone XS (though i'm thinking of side-grading to the new iPhone mini in the hopes that a smaller screen and lighter weight device will help with my rsi), a shitty Samsung Tablet 8 (i think?) that i use to play around with android distrobutions. right now its running lineageOS. I also have a switch for playing games.

I'm in the process of building out a version of my brother's deskmx project; i have 3 mixers (one acts as a preamp for mics, one is a mic input splitter to connect to all my devices, and 1 is just for headphones). this is still on going and i'll probably write about what i've done and what, if anything, i did different than my brother once its finished.

i have two ergodox infinity keyboards; in the past this was so i could have one at work and one at home. now i just have one on my desk and one on my workspace, for when i inevitably change out some switches. i love these keyboards, though i do wish i could have better tenting. I also have a ~10 or 11 year old razer black widow 10keyless which is just like the one linked except doesn't have backlighting or rgb or any of that. this has lasted a respectable amount of time, though I did have to replace the USB IO board in 2020.

i have a stupid collection of mice, mostly as part of a "can i help my RSI" series of experiments. God's own mouse is the logitech g9x, which i had for 8 or so years before it finally gave up the ghost. i love that mouse. It now sells on ebay / amazon for 399, though when i bought it first i think i paid ~60 USD for it. I also have a logitech vertical mouse which I am currently using for most of my computing needs, and a benQ zowie EC1 which I hoped would adequately replace my g9x in terms of hand fit, and it did not :(. 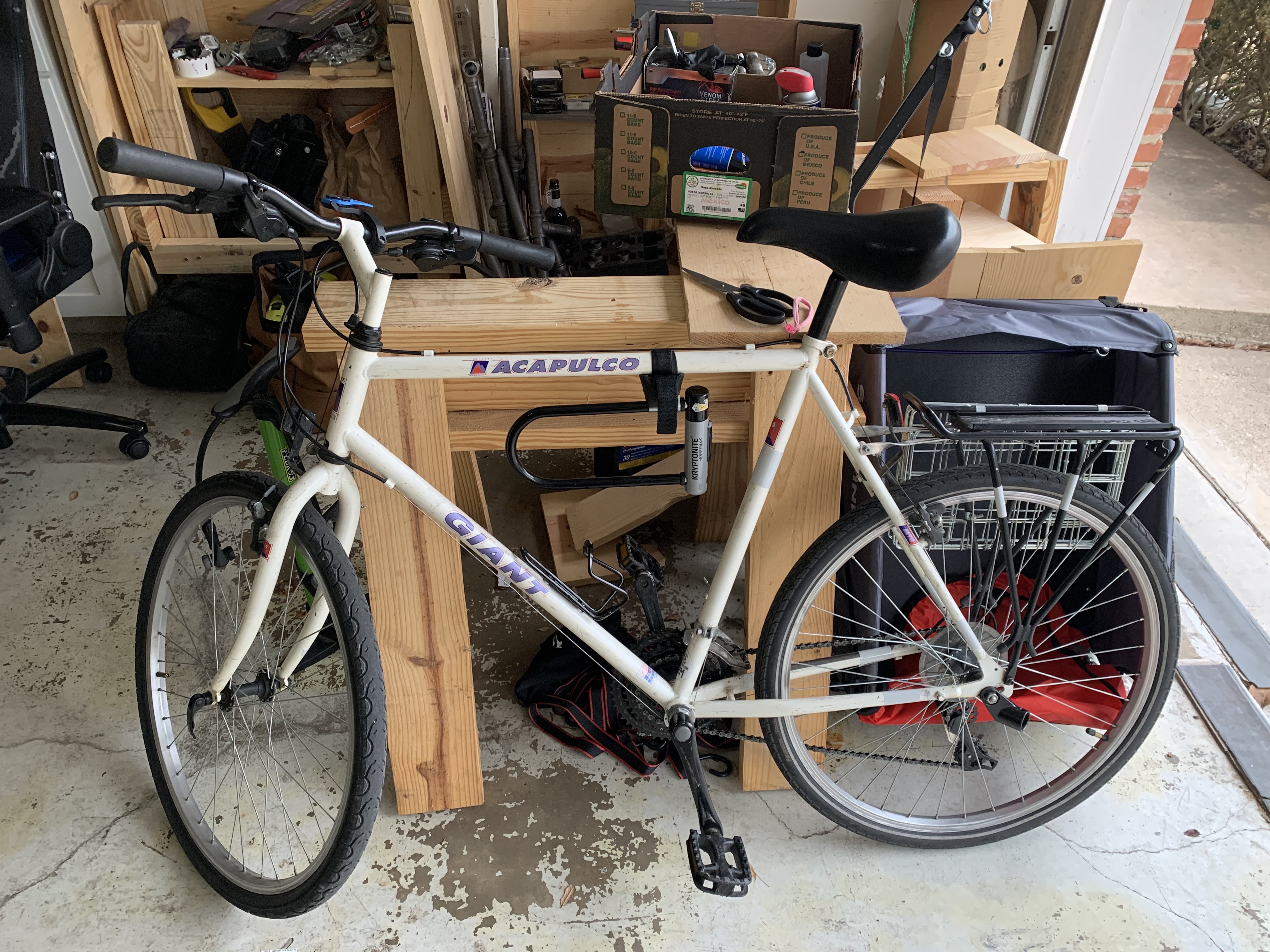 i also have a beat up 90s era hardtail bicycle that i love to death. its a piece of shit and i love it very much. i am also excited to buy another bike, eventually, but this one is suiting me just fine for now.

Nothing crazy here outside of my desktop. i primarily use linux things. for my personal every day use, I rely on nixOS. i love it a lot. for all my servers i run debian, though I hope to change that soon to either guix or nixos (depending on cloud support). I use macOS for work, and windows to play games that aren't fully compat with valve's proton°  tool.

this is a bit more interesting.

on top of nixOS i have a (i'm sure terrible) desktop environment. i use awesome window manager to orchestrate everything. i use rofi as my launcher, window switcher, etc. I have come to rely on espanso to give me access to emojis and text macros - an exmaple of this is I can type like :sparkles: and get ✨ to appear! I also use scrot to give me a good UX when screenshotting. i use firefox as my browser, and basically everything else that isn't terminal based I do in gnu emacs.

emacs, and all the shit i do with it

emacs gets its own section because its so fucking good. emacs is a platform for solving problems you face on your computer. in order to be a good user of emacs you need to know emacs lisp (sorry lol). once you are comfortable at least fucking around with existing code and modifying it to better fit you, you become capable of addressing basically any problem you might run into.

katherine cox-buday (interviewed in uses-this, who i cite at the end of this article) describes emacs and elisp like this: "If you know a little emacs-lisp, you can begin down the path of creating your own perfect tool which will grow with you, for life." I really like that; over years I can make a tool that's worn to exactly how I hold the keyboard, how I move between applications, etc. emacs is dope.

the two primary things I do in emacs:

If you want to look at my dot files they are here.

i'm not doing anything very interesting here outside of my emacs/elisp usage.

services i host and use.

as mentioned previously, my mediaserver setup hosts the *arr apps° . I use plex°  to serve media files to my users (me, friends, family). i store the configs for these things in a docker-compose format that deploys a swarm, which itself is deployed through ansible.

I use bitwarden's°  hosted offering for my password manager. I moved to it from 1password, which I think is mostly better (especially from a polish point of view), due to the availability of clients on more platforms than 1password offered. 1pass now has a linux client, I understand, but opensource is my preference politically anyway. I've written about the process of moving to bitwarden here.

for cloud infra services i am currently using digitalocean° . i may end up migrating off them to get to a provider that gives me more control over my OS, but i really love DO.

this blog is currently hosted on github pages as mentioned previously. i use fastmail for email and i really like them. i'd like to not have a reliance on an australian hosted company for reasons but, frankly, email is plain text anyway and trying to force encryption on top of the email platform tends to fail real bad (see gpg). long term i'd love to move but nobody else has as good a product for the same ballpark of price.

this doesn't exist the fun part is fucking with what you have! here are some things i'd love to try out:

if there's anything you've read from uses this that you especially liked email me about it. i'd love to read whatever you liked :)